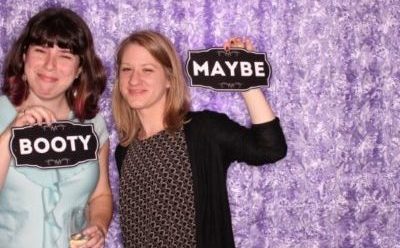 On New Year’s Day, my friend Eve and I brunched in the Castro. I was lazily flipping through SF Weekly when I spotted an ad that set my feminist heart ablaze. Not just the usual spreads for Larry Flynt’s Hustler club — though, wow, they really committed to that Super Bowl theme! — but a coupon for free admission to a luxury bridal show.

Here was our chance to face an evil empire that had fed us all unhealthy notions of weddings, from passive Disney princesses to 50 Shades of Grey, from our obsession with celebrity marriages to $45,000 wedding venues.

Like modern-day Gloria Steinems, we would shatter a sexist institution from within. Or, at the very least, score some free cupcakes and champagne. Suck it, capitalist patriarchy!

First, we decided to define our aliases. I decided to go by Reagan (rhymes with MEE-gan); my imaginary parents were big fans of trickle-down economics. My fiancé, Astronaut Mike Dexter, met when my Labradoodle and his boxer got entangled in a Noe Valley dog park. (In retrospect, I’m pretty sure that’s the plot of 101 Dalmatians. I don’t watch a lot of rom-coms.)

Eve’s story changed several times; she finally landed on “I’m in a real shotgun wedding-type situation,” which complemented her double-fisting champagne throughout the afternoon.

We arrived to the Grand Hyatt to find hundreds of people waiting to get in to the bridal show; maybe 5% of whom were dudes. Waiting in line, we chatted with two middle-aged ladies about Eve’s favorite subject matter, Channing Tatum, and his recent Beyoncé-themed performance on Lip Sync Battle.

Our first test caught me off guard: The woman at the registration table cheerily inquired, “And which one of you is the bride?” Instinctively, I almost blurted “psh, neither of us!” and it’s a good thing I didn’t — because stickers were on the line. Thankfully, Eve swooped in with a “we both are,” to the woman’s delight. We were rewarded with “Bride-to-Be” stickers and tote bags from The Knot, a wedding website. Then, we were free to explore:

In conclusion, I can now see why the average American wedding costs $26,444. (For the record, you can have great parties with a $3 box of Pillsbury Funfetti cake mix.) I highly recommend a luxury bridal show…for anyone interested in doing some free day-drinking in a Hyatt basement.